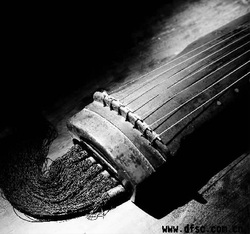 Guqin is the modern name for a plucked seven-string Chinese musical instrument of the zither family. It has been played since ancient times, and has traditionally been favored by scholars and literati as an instrument of great subtlety and refinement, as highlighted by the quote “a gentleman does not part with his qin or se without good reason,” as well as being associated with the ancient Chinese philosopher Confucius. The qin is a very quiet instrument, it has a history of at least 3,000 years. In 1977, a recording of “Flowing Water” was chosen to be included in the Voyager Golden Record, a gold-plated LP recording containing music from around the world, which was sent into outer space by NASA on the Voyager 1 and Voyager 2 spacecrafts. The reason to select a work played on this specific instrument is because the tonal structure of the instrument, its musical scale is derived from fundamental physical laws related to vibration and overtones, representing the intellectual capacity of human beings on this subject. In 2003, guqin music was proclaimed as one of the Masterpieces of the Oral and Intangible Heritage of Humanity by UNESCO.

Qin Streller-Shen （沈沁）, lives between the eastern and the western cultures and lives in Switzerland since 1999.

She was born in a music family, start playing piano with Prof. Yefei when she was 6 years old. From 1991 to 1999, she studied western and Chinese music at China Conservatory of Music (中国音乐学院) in Beijing/ China. There she learnt Qin and Zheng with Chinese masters Prof. Wu Wenguang and Prof. Qiu Dacheng and has played very often at the traditional “Qin Meeting”.

The Guqin lessons will be given individually for 5 times. We learn play Guqin with and without notations. Beginners and advanced players are all welcome. The course leader will try to teach according to personal strength and wishes.